Research and implementation of the SOA programming model 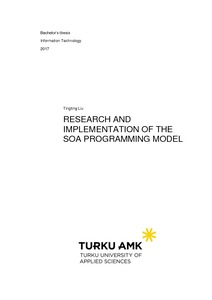 The application systems of an enterprises are increasing gradually with the development of the IT industry. There are several heterogeneous systems left after the software development, some of them are programmed with different languages, and some are running on different system platforms. Thus, aggregation and integration of legacy system is a great problem for the modern IT companies. That is the reason why Service-Oriented Architecture (SOA) has been used by some IT elites. SOA has the characteristics of loose-coupling, regardless of technology restriction, integrated, it is manageable and maintainable, and has became one of the most popular software architecture in recent years. Although there is a variety of technologies which has been brought forward to this area, but the most attention-grabbing one among these technologies is SCA (Service Component Architecture). SCA is a specification which is used to describe in a constructs application and system model with SOA. Systems based on SCA have more advantages than SOA in some specific area.

This thesis has researched the critical technique of making use of SOA to construct application and system, a design and implement the integration of the legacy system, it also provides a new method for a small and medium-sized enterprise which needs to integrates legacy information system. Besides, analyze the SOA Architecture theory system and Web Service security protocol, focusing on an analysis of the SCA specifications and the SCA Security policy of the SCA policy framework are also included. Finally, this thesis also has made use of the design ideas of SOA and SCA programming model, with Apache Tuscany and PHP SCA implementation technique, to achieve the integration among the legacy MIS system for the company.