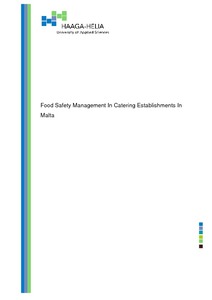 The aim of this bachelor thesis is to produce a schematic view of how legislation both European and local has actually been successful in the field of effectivly minimising the incidence of food poisoning. The world yearns for progress thanks to laws and directives and to better education of the general populace in the field of healthy and safe eating habits and a wide contribution has been consented thanks to the output of The WHO and its Codex Alimentarius based in Rome , The FAO of the United Nations, The UNESCO , The General Agreement of Tariffs and Trade 1994 and its setting up of Sanitary and Phyto Sanitary Standards and revission of the technical barriers to trade , just to mention but a few have all been instrumental in such a progress but yet on a local dimension one must not ignore the challenges we face in our country. HACCP is European Regulation 852 2004 and Malta being a member state had to become compliant as from January 2006. The law was not intended to be a shock as it was also Directive EEC 93-94 12 years before however how can a law of this magnetude affect a country which has been so effected by the political turmoil that was happening in neighbouring African countries and the Eastern Block? Thousands of political asylums have sought refuge in our country compounding pressure on the labour market , we are here referring to the most densely populated country in the world , almost half a million on a 19 mile stretch of land . Such refugees have in the main saught employment either in food manufacturing or the catering industry, most of which have minimal knowledge in food hygiene. Other issues are global warming and the fact that the height of the tourism market in this country is spring/summer thus employabity is mainly part time and that limits training procedures ,besides the fact that industry is mainly run by SME’s who face budgetery constraints to ensure that staff is adequately trained in hygiene and the trade.
The main goal of this study is to look into the progress and achievements that have been acquired through the years and achieve an insight of how well these are being conducted. I shall start of with the theoretical part as this forms the basis of the study that creates a balance between the tacit and the true reality.The laws are one of the main features of this study and we are going to see how well these have been implemented. Chapters 6 and 7 deal with the implicit element of my study as they deal with factual reality of the Maltese situation through statistics which is then further debated in the empirical part of my study. Main conclusive thoughts will be manifested through the acquisition of questionnaires that will be distributed to the general food industry workforce.