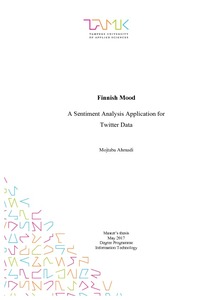 Sentiment analysis or opinion mining is an emerging and fast-growing field of modern science which aims to understand people’s opinion from texts. Sentiment analysis applications are growing in many different fields such as marketing and politics. As an example, sentiment analysis is being used for evaluating the products from customer’s reviews.

The purpose of this study was to gather information related to make a sentiment analysis application to estimate how Finns generally feel in a specific time, what is the most important topics for them on that time and how are their attitudes toward each topic, e.g. In 6th of June people in Finland felt positive with average grade 6 out of 10 and the most positive topic was ‘weather’ with average grade 8 out of 10.

A light working version of the application was created using Twitter data. After the data were collected from Twitter APIs, they were analysed and graded in backend server and the result was published in a web page. The result of each topic was calculated on the scale of 1 to 10 and in three different opinion classification. positive, negative and neutral.

The outcome of this study along with implemented application will be used as parts of the proof of concept (POC) for further developments which could be either in form of a web-service or an independent API, especially by implementing the service in the Finnish language which currently is not available.