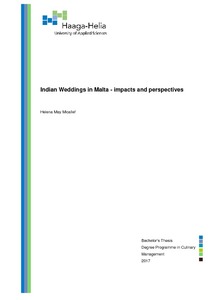 The idea behind this title is purely for my own interest, as I believe this could be a very ben-eficial niche market for the Maltese Tourism Industry. It all started due to the fact that the Institute was approached by a destination management company to assist in a huge up market Indian pre-wedding held on the island.

This gave an opportunity to not just the students involved but also myself as a lecturer in such subjects, to experience a whole new approach to weddings and special events. The pre-wedding lasted for a total of three days, but the organisation and the planning behind it was something else. The involvement of various entities during this event was vast, which also gave rise to a huge influx of revenue being generated, thus helping the contribution to the Maltese economy. It has to be mentioned that the type of pre-wedding which occurred was a high-end wedding, where both families aided and assisted in the financial back up of the whole event. In fact, they not only brought their own chefs and cooks, but also had their own wedding planners, who were brought purposely to organise the pre-wedding according to their traditions and culture.

This is also another aspect of the thesis. Due to the different caste system in India, the cul-tures and diets of each tribe various, and therefore with each and every event, food can also be a challenge. The high-end Indian (Brahma (Brahmin) community are used to a life of luxury and when such events occur on the island, they expect to be of the same stand-ard, as they the events done back in India. The type of service accustomed by them is very high and therefore this would mean that the man power in these events would double in size, bringing more jobs to the industry.