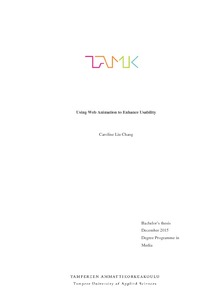 After the theoretical section, the study discusses a usability test which was conducted in the case company Verto Analytics to understand current usability issues of the product called Monitor. The issues which could be potentially improved by web animation were selected with the production team. Animation proposals for the implementation were then suggested.

The study results suggest that animation can improve the usability significantly in several situations. When there is a complicated feature in the application, using animation helps to demonstrate the feature to the user. Animation draws users’ attention to the feature, and, therefore it’s useful to implement animation when communicating “hidden” messages to the user. Web animation can also improve the usability by bettering the loading messages. On the other hand, web animation should be considered when the interaction and visual elements are designed. Overusing of animation can slow down the performance of the application and cause visual chaos.