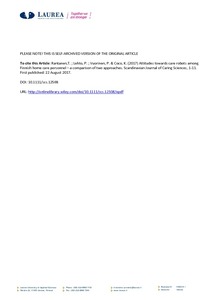 The significance of care robotics has been highlighted in recent years.

A cross-sectional study conducted by questionnaire. The research data were gathered from a survey of Finnish home care personnel (n = 200).

The Negative Attitudes towards Robots Scale (NARS), by Nomura, with a specific behavioural intention scale based on Ajzen's theory of planned behaviour, and a measure of positive attitudes towards the usefulness of care robots for different tasks in home care and the promotion of independent living of older persons.

The study is based only on a Finnish sample, and the response rate of the study was relatively small (18.2%), which limits the generalisability of the results.

The study shows that the examination of home care personnel's attitudes towards robots is not justified to focus only on one aspect, but a better explanation is achieved by combining the perspectives of societal attitudes, attitudes related to psychological reactions and the practical care and promotion of the independent living of older people.