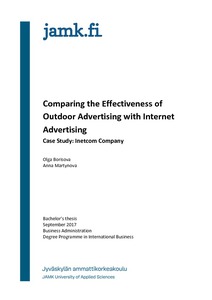 At the time of rapid changes, it might appear that some aspects of the pre-online life are vanishing. However, they have only mutated into new fascinating forms which arguably prove to be more effective and usable by tech-savvy population. In the marketing world, numerous techniques, including both traditional and non-traditional media, are used to attract and retain consumers.
The purpose of this study was to identify the effectiveness of the case company’s advertising methods, namely, outdoor advertising and internet advertising, and then justify outdoor advertising as the most effective marketing method in the company. The study results were found to be important as they would influence the profitability of the organization based on avoiding ineffective advertising methods. The study was implemented by conducting theoretical research and then analyzing the data provided by the case company. The research design was that of the mixed approach: both qualitative and quantative methods were applied. The quantitative approach was used to obtain numerical data from the respondents based on the following categories: demographic, age, marital status and level of education. The qualitative approach was used to obtain information about the participants’ personal responses or authors’ observations in the field.
The results of the study showed that despite the popularity of advertising on the Internet, it was often associated with fraud and should not be considered as reliable as outdoor advertising. Outdoor advertising was identified as a facilitator of acquiring accurate access to data and elongating the advertising period at the same station. Based on the research findings, the case company was advised to focus on outdoor advertising rather than on Internet advertising.