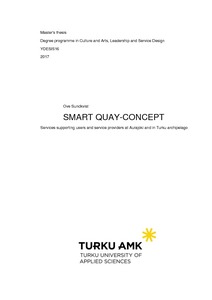 This service design thesis was a research study on integrable services in the new movable Smart Quay, which was planned to support the new automatized electrical ferry connection in Turku and Turku archipelago. In this study, the aim was to determine the demands of the users such as local inhabitants, tourists and boaters using possible services provided at the new Smart Quay. The aim was also to determine the needs and demands of possible service providers and stakeholders in Turku and Turku archipelago, as they also are possible users of the future Smart Quay concept. The thesis was conducted as a part of the ÄlyVESI – Smart City Ferries project that is a cooperation project between Novia University of Applied Sciences, Aalto University, Turku University of Applied Sciences and the City of Turku.

A service concept based on the research results gained mainly through documented material, interviews and benchmarking was created. This service concept showed how the Smart Quay could serve as a modular platform that benefits both the inhabitants of Turku, customers and service providers and people visiting, living and working in Turku and in Turku archipelago.

As this Smart Quay does not yet exist, the possible implementation of the suggested Smart Quay concept modules are to be made by the commissioner and stakeholders related to this project. As this was the first study conducted on the matter the service concept suggested here will be reevaluated and redesigned before an implementable version is developed.