Nudging Problematic Smartphone Use to a Lower Level 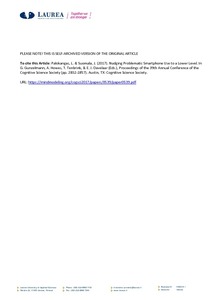 Smartphone usage has evolved in people’s lives from necessity to habit and in some cases leading to compulsive use and addiction. However, only a little research has been performed on the prevention of Problematic Smartphone Usage (PSU). Behavioral economics has been applied to investigate how smartphone users respond to nudges that try to lower their smartphone usage. Findings revealed that the Total Screen On Time (SOT) decreased when nudging smartphone users with information on their usage behaviors. Intermittent glancing, as well as the median session time increased, and the reduction in SOT was no longer statistically significant in the observation period after the nudges were no longer applied, suggesting relapse in smartphone usage behavior.