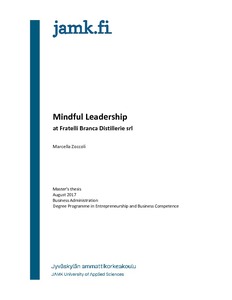 In the current transformative change, in which many crises are happening simultaneously, leaders and entrepreneurs need extra tools and force beyond their usual individual
leadership and interpersonal skills in order to be successful. The aim of the study was to explore the personnel’s perceptions and the experiences of Mr. Niccolò Branca’s Mindful Leadership at the case company, Fratelli Branca Distillerie srl. The company is a well established
Italian company founded in 1845 and it operates in the spirits sector.
The purpose of the research was exploratory, and it was conducted using one of the major methods of qualitative research into leadership: the case study. For the empirical inquiry was chosen the unstructured interview and additional personal written notes were taken during
the research process. The inductive approach was used to investigate themes by selecting the information. In addition, abductive reasoning played a role in the interpretation of data incorporating existing theories and generating a new approach.Five broad themes emerged in the results. They were used as parameters in the managerial model of the Mindful Leadership TEMPO, which is based on a complex process consisting of four interactive phases developed in the system formed by the leader, the employees, the elements of the leadership’s theoretical framework and the agents of change.
Recommendations were given for the benefits of the company and the international audience. The model of which core capability relies on being in tune with the Self, the others and the environment can be used by those companies looking for new solutions to improve their capabilities for change in the middle of a constant transformation that challenges daily competitiveness, profitability and ultimately a prospect of survival, let alone success.