A study of asylum seekers in Finland : The effect of parents’ trauma on their children 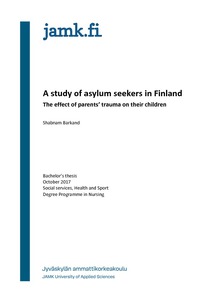 Refugee parents think difficult immigration condition traumatized their children
Nursing student Shabnam Barkand at JAMK University of Applied Science investigated in her thesis how the immigrants in an asylum seeker center in Finland perceive the effect of traumatic incidents happening during immigration on their children. According to this thesis, the immigrants believe that their children show different symptoms of traumatic behaviors, and the parent such behaviors are related to the incidents happened during their immigration from their original countries to Finland.
The study showed that these immigrants had a difficult trip to Finland. For example, they had to walk for long hours, stay out in nature, and cross the sea using dangerous boats. In addition, they have to deal with the smugglers and the problems such as losing their luggage, giving birth to children and being arrested by the border patrols.
Life for these immigrants has not been much easier after arriving in Finland. They have to live in asylum seeker center along with many other families from different countries. In these refugee centers, they do not have much privacy. Furthermore, they are constantly worried about the result of their asylum applications. If their applications are rejected, they have to go back to their original countries.
The immigrants believe their trip incidents and living in stressful refugee centers have had negative effects on their children. Some of the effects they described could be symptoms of traumatization. For example, the parents reported that their children suffer from constant nightmares, loss of appetite and extreme fear. They also mentioned that their children have become more aggressive after immigration. The parent believe both trip incidents and living in the refugee center are related to such problems. One parents for example said her child has nightmares about the sea and boats, while another one reported fear and anxiety after they receive a letter from post, because he think it is possibly their letter of rejection.
The information about this research was collected through interviewing three Afghan women in a refugee center in Finland. Along with the women, refugee men were also invited to the interview but they refused to participate. The interviews took place in private rooms, and in Farsi, the refugee’s mother tongue. These three mother signed a consent form before the interview. Then, the interview transcribed in Farsi and translated to English. Another Farsi native speaker double checked the texts to make sure about the reliability. Then, the major themes of the study were coded, based on the ideas the participants share together. The two major themes emerged in the study were the problems of the parents, and the traumatized children.
The interviewees were three Afghan women whom were called Ameneh, Leila and Afsaneh to hide their real identities. They had a difficult trip through Iran, Turkey to Greece by boat. The boat trip seems to be the worst part of their immigration and caused a lot of psychological problems for the families. They are currently living a refugee center in Finland and waiting for the result of their asylum application.
The study concludes that it is necessary to educate the parents how to cope with the traumatic behaviors of their children, and to make a difference between traumatic behaviors and normal disorders. The study also put emphasis on the role of psychological assistance for the refugees and their families at the refugee centers. Also it indicated the importance of further research on children trauma.