Effects of urban noise on singing of the Whitethroat Sylvia communis 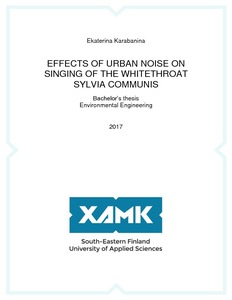 Acoustic signals of birds have two basic functions: mate attraction and territory defense, which are interrelated. Noise waves interact with bird’s song, resulting in reinforcement and interference or reverberations, i.e. noise hinders clear sound transmission. It forces birds to either adapt to high noise levels or to move to another area. Earlier studies showed that some bird species increase the frequency or amplitude of their songs, change the time of singing, and reduce song length to cope with urban noise. However, the Whitethroat (Sylvia communis) was not among the studied species in that topic.

The aim of this research was to study the effects of urban noise on singing of the Whitethroat, based on nine selected parameters: minimum element frequency, maximum element frequency, maximum spectral frequency of an element, length of elements, song length, total number of elements in a song, number of different elements in a song, singing activity, and length of pauses between songs. Singing males were recorded for ten minutes per male in two study areas: Sebezh city (urban) and Sebezhsky National Park (rural). Songs from both study areas were compared using song spectrograms on the nine study parameters.

The study showed that acoustic communication of the Whitethroats is also affected by noise. Recorded males in urban area had shorter song elements and shorter pauses between songs than in National Park. Other parameters were not statistically different. However, several aspects that could affect the results were not included in this research, such as level of noise, age of the male, mating status, presence of singing neighbors, developmental history, and resource abundance. Besides, larger sample sizes could provide more reliable conclusions. Despite the fact that the difference in singing of the Whitethroats in urban and rural areas was found, further studies would provide a better understanding of the effects of urban noise on singing of the species.