A plan on creating a video game store in Kokkola 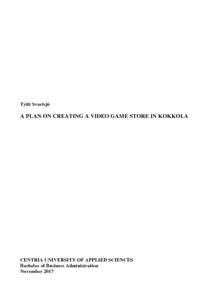 The main aim for this thesis was to investigate the situation in Kokkola regarding the establishment of a new video game store. The bottom line was to study whether it would be a profitable idea to carry out a plan to create such a store, by determining is there a market for a store selling specifically video games. Also, the reactions of the general public were highly valued to adjust the actions and services of the said video game store.

In theory, the contents cover data from different resources such as news articles and published writings. The matter was approached by gathering information on the prevalent situation and pondering various scenarios from the surrounding world affecting the stores operations. In addition, the effects of the video game store were brought up and evaluated. Since the field of video game industry is vast, a large amount of background information was covered in the document to give the reader a deeper understanding on the matters studied.

The writer's own thoughts and existing knowledge is added in throughout the document. The competitive situation, as well as the development of the city of Kokkola was taken into account and studied by the author. A qualitative study among the general public was conducted in October of 2017 to obtain their insights on the matter. When combined with the data gathered from the source material and the writer's notions, the people's answers proved to be a significant part of the process.

The conclusions were reached by analyzing the data from different viewpoints. The end result formed and changed through the process. Mostly, the situation at hand was the heaviest factor in evaluating the final decisions. A business needs its customers to keep on operating. However, the world of today offers the consumers various solutions when it comes to purchasing products. Still, the future is not set in stone and predicting the turns of events is not always accurate.