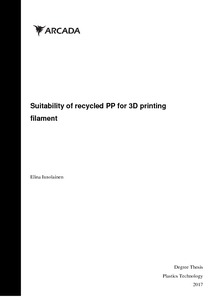 This thesis investigates the possibility of manufacturing 3D printer filament from CIRCO® recycled polypropylene (rPP), provided by Fortum Waste Solutions Oy. Nowa-days, ABS and PLA are two dominant thermoplastics used in filament form for 3D printing. The literature study, therefore, focuses on finding out why PP, being one of the most used plastics in the world with a multitude of appreciated properties and consequently applications, has not yet landed in 3D printing. The empirical part of the work is primarily aimed at finding out the feasibility of producing a good quality rPP filament suitable for 3D printing. The other methods used are tensile testing to analyse mechanical properties of rPP and melt flow index measurement, which is conducted for obtained rPP filament and ABS and PLA commercial filaments to compare the materials on this count.
According to the literature research, PP undergoes heavy warping and has poor layer adhesion during printing. Only very few printers currently manage to print with it given that special equipment setup is arranged. As the empirical study showed, it is not feasible to produce rPP filament of satisfactory quality, at least with the available equipment. The best possible results with respect to the quality of the filament can be achieved by using the water bath as a cooling method so that the temperature of the cooling water would be much higher than the room temperature as well as the extrusion temperatures should also be high enough. Additionally, it is experimentally established that when using virgin PP as a clean-ing material prior to extrusion of rPP, the quality of the produced filament is considerably better. However, it is still unsatisfactory to use it in a 3D printer. It has relatively large diameter variations of around ±0.30 mm while the acceptable deviation is ideally ±0.05 mm. The produced filament does not have perfectly round shape, but rather elliptical.
As for the testing of material properties, CIRCO® rPP has better flow properties than virgin PP and no significant difference in mechanical properties is noted. The obtained rPP filament has also significantly higher MFI values than both ABS and PLA commercial filaments and in terms of this parameter is not comparable to two most dominant 3D printing materials.
All in all, rPP seems to have a potential of successful conversion to 3D printer filament. It will need some further research on how to get around the main issues, which are the filament roundness and diameter deviations across the entire length of the filament.