"I felt helpless'' : a qualitative study on female's experiences with female genital mutilation 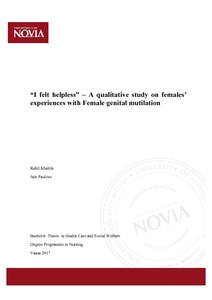 Summary
While asylum seeking increases throughout Europe, the Finnish health care faces new challenges on how to approach or treat people from certain backgrounds. This was a leading point to discuss female genital mutilation issues. The aim of this study is to describe the health effects of FGM and to describe those females’ care experiences from Finnish health care providers. Concepts of health by Levine (1995), Roy & Andrews (1999), Barker (1999), Eriksson (1994) and Johnson (1990) and caring by Martinsen (1993), Gaut (l983), Tountas & Dalla-Vorgia (1994), Halldorsdottir (1996), were chosen as a framework to fit the subject. As a qualitative study, the data was collected through a semi-structured interview. Five females with foreign backgrounds were interviewed and the collected data was then analysed in a deductive way.
The result shows the effect of FGM on females’ health physically, psychologically and socially. It also highlights females care experiences with healthcare providers regards FGM which were both positive and negative. The study shows the thoughts of females who undergone FGM and gives also a sight on how to approach them in holistic caring manner.