Dreams and Seeds : The role of campuses in sustainable urban development 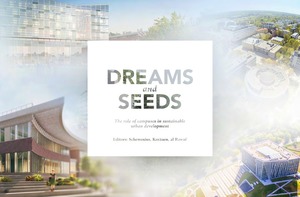 The project Live Baltic Campus has explored how university campuses can serve as local test beds and guides for new planning and design approaches. The project has aimed to build capacity in urban planning and design to harness the potential of a changing social, ecological, and financial context. Six higher education institutes in cities around the Central Baltic area have collaborated to utilise participatory design methods in developing their local campuses, and sharing the results on their findings.

Campus development, much like urban planning in general, relates to the concepts of dreams and seeds: visions of the future, and a continuous flow of, often small, actions and decisions required for bringing the visions into reality. This book is a compilation of the insights, perspectives and practical examples encountered and produced during the two-year joint exploration to find the ingredients and the correct local measurements for sustainable urban campuses.