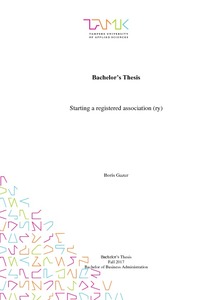 The idea for this thesis was born in the spring 2017, when we organized a small art festival in the city of Tampere. The festival was a hobby project that came as a wild idea sometime in January and was actually realized in May 2017. The event was called Arifest and it was organized by roughly 8 people without any legal organization behind it. Arifest was quite a success but everyone realized the need for a legal entity to be behind it in the future. Organizing cultural events is a financial strain. Arifest 2017 was organized by a voluntary workforce and financed purely by goodwill of the city of Tampere and people’s personal finances. A legal organization would give any future projects more clarity and would allow to acquire financial support from different cultural grants. On top of the benefit to be more financially open to possibilities, a legal organization would also bring people together and would give many people ideological focus and sense of belonging. The idea came to be – Arifest 2018 would be organized under our own association.

Finnish legal system allows for a creation of a ‘rekisteröity yhdistys’ (ry) – a registered association. This mode of operation allows for a group of likeminded people to have a legal organization and stand as a legal entity.

This thesis will follow the creation process of our new association. It will describe all things required, from the preparation phase to the actual administrative running of said association. The point of this thesis is to have a running association (ry) by the end of it, and have a written guide with a commentary as an outcome.

The last part of the thesis will touch on a subject of bookkeeping for this association. I hold personal interest in the documentation of finances and would like to take an active administrative role in this association, as it compliments my studies and future prospects for work.