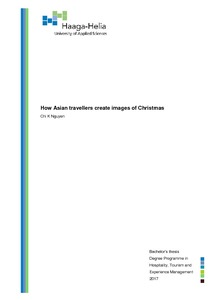 The narration of Christmas stories has been existed for hundreds of years, however, how does one possibly realize at what point that it begins to “look a lot like Christmas”? This paper will generally discuss how the image of Christmas was originally established in the mind of
certain ethnic group, particularly here are Asian travellers.

The theoretical part introduces about the theory behind the entire thesis, which mainly based on the Tourism Destination Image (TDI) literature. A customized framework adapted from many sources of previous works on the TDI has been created by the author to best lead the collecting data process. This framework provides the mechanism as well as factors affecting the process of creating image of Christmas, then, results in generating definition of Christmas image.

The empirical part uses the qualitative research method, particularly semi-structured interview with seven Asian coming from different background, to find out the answer to the research question: “How Asian travellers create image of Christmas?” Thematic analysis has been utilized to settle the data.

The finding and analysis presents the result of the interview and also reflects on what theoretical framework has stated. The outcomes have shown that the image of Christmas can be considered to be made of five schemas: place, self, emotion, event and social. However,the event and social schemas might be interrelated and emerged as one at some point. Then, the four factors projected image, socio-cultural, technology and user-generated definitely has a certain effect on the formation of Christmas image in Asian travellers.

Finally,the image of Christmas has been defined as a voluntary, multisensory, picture-like, conscious and quasi-perceptual mental experience held by Asian travellers.