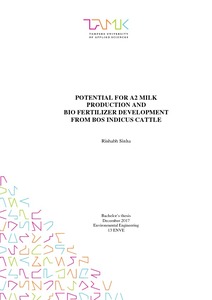 The aim of this applied research was to find the potential for A2 milk production and, development of bio fertilizers and bio pesticides utilizing native Indian cattle (Bos indicus) in the two villages of Katavali and Ambavali in Sangmeshwar Taluka, North Western Ghats, Maharashtra, India. A community survey, based on a structured interview, was conducted in both these villages to collect information such as: lactation period, milk output, grazing pattern, urine output and population of the native cattle. The research was commissioned by the Applied Environmental Research Foundation (AERF); an NGO concerned with biodiversity conservation in this region.

In Katavli 160 native cattle were identified with a mean of 4.5 cattle per household. Out of these 45 were native cows amongst which 30 were in lactation. Likewise, in Ambavali, 161 native cattle were found, out of which 44 were native cows however only 10 were in lactation. The average lactation period of the native cow was found to be 7 months whereas, the average milk output per cow was 1.4 litres per day. The monthly milk output of the native cows in Katavali and Ambavli was 1260 litres and 420 litres respectively. The monthly urine output of the native cows was found to be 5700 litres and 5550 litres in Katavali and Ambavali respectively. Most of the households of both the villages were interested in selling native cattle urine to produce bio fertilizers and bio pesticides.

Findings of this research suggest that, both villages have potential for increasing A2 milk production and, bio fertilizer and bio pesticide development from native Indian cattle. However, in order to improve the milk output of native cows, better feed needs to be made available to the farmers at affordable prices, water scarcity needs to be re-solved during the dry season, cattle sheds need minor modifications to make urine collection easier and awareness should be spread regarding the benefits of stall feeding with respect to milk production and urine collection.