Is sharing truly caring? The capitalisation of the sharing economy 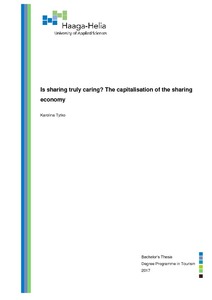 This thesis provides a research overview regarding definitions, benefits and issues of sharing economy. The aim is to outline complexity of the sharing economy trend and to examine the dangers of sharing economy and its capitalisation in the realities of free market, often referred to as platform capitalism.
Sharing economy is not a new economic model. However, the scale of it is bigger than ever before thanks to technological development. Consequently, the blurred definition of the trend and confusion with terms are leading to increased deregulation, promoting grey area and accelerating precarity. In media, both experts and consumers use interchangeably terms such as collaborative consumption, peer economy, collaborative economy, on-demand economy, gig economy, to describe the same phenomenon.
Moreover as the commodification of sharing economy is progressing, corporate platforms providers use the notion of "sharing" being an ideology for on-demand labour system, called platform capitalism.
To countermeasure, the governments all over the world struggle to put sharing economy in a legal frame. The challenge is balancing regulation and self-regulatory systems, as sharing economy can be a solution towards more sustainable lifestyles. In Europe, European Parliament recognized several issues within these forms of consumption and strive to put it in legal frames. Meanwhile, in the United States, platform cooperativism emerged as a bottom-up response to spreading of sharing economy as an on-demand labour system. The main message of the movement is that none of the issues of fairness, labour rights, healthcare, and privacy can be changed until the society reinvent shared ownership, democratic governance, and solidarity.
Nevertheless, enthusiasts of sharing economy point out that this model develops the means people can collaborate, share goods and services. Moreover, sharing economy implies returning to sources and such model of the economy can be seen as a complement to the mainstream economy with social responsibility.