Development of a reporting and budgeting tool for a middle-sized company : case of Järkevä-ratkaisut Oy 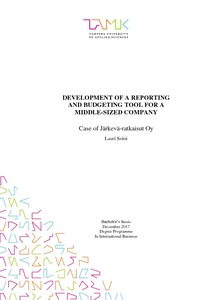 This thesis and its project were conducted for a Pirkkala-based company called Järkevä-ratkaisut. The CEO of the company is a former TAMK-student and he was seeking for a student willing to develop the already existing Excel-tool for reporting- and budgeting. The work was done in two parts; first the tool itself was developed according to the demand of the company, and the second step was the writing process of this study explaining the project.

The aim of this paper is to explain the project of developing the reporting tool and its functions as profoundly as possible, and to give a theoretical point of view to the matters at hand. This has been done so that first the theory behind the tool is explained so that the reader will understand the purposes behind the developing project, and the benefits this tool creates for the company using it.

The development project was done by updating the charts of accounts to a bigger scale, adding more useful key figures and sheets in order to make the surveillance and reporting more fluent, and making it easier to base the official reporting and budgeting of the firm on the tool. One objective was to make the tool in a way that basically any company could use it for their own purposes. This was done with the mindset of sharing economy. The tool of this study is not an accounting tool, its sole purpose is to ease the reporting, budgeting and monitoring of the firm’s financial state, income/loss, cashflow etc. Even though the tool can definitely be used as help when working on the accounting for the company, it is not an accounting software with double entry systems and other procedures normally included in the accounting process, and it does not necessarily meet the standards set by the IFRS and other accounting regulations.

The results of the work were satisfactory for the firm, and later on the writer received work assignments related to the tool from a consulting company which is also run by Mr. Memonen. These assignments mainly included filling the tool with the accounting information of companies that are clients of the Memonen Holding and Consulting Oy.