EXAMINATION OF THE EFFECTS OF CHILDHOOD OBESITY ON STUDENTS 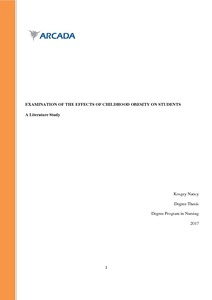 Background. Childhood overweight and obesity are among the world’s most serious health issues among school going children in the contemporary world. The WHO estimates show that the number of overweight children under five years in 2015 stood at more than 42 million in 2015. The health risks associated with this global trend have been shown to be significant and wide-ranging. Overweight and obese children suffer from health risk factors including endocrine, gastroenterological, pulmonary, neurological, and orthopedic conditions.
Method. In this research, the researcher undertakes an evaluation of secondary data sources in order to identify the health impacts of childhood obesity on school going children, as well the nursing interventions in such health consequences. The inductive content analysis was then utilized in analyzing the most relevant secondary data sources with the objective of quantifying emerging concepts and characteristics.
Results. The study established that childhood obesity has a significant impact on the psychological and physical health status of school going children. Most of the physical consequences of childhood obesity were found to include issues such as impaired insulin sensitivity, cardiovascular diseases, kidney, type two diabetic, colorectal, and esophageal cancers as well as hypertension. Psychological consequences included bullying in school; poor academic performance, depression, and low self-image were also seen to affect obese and overweight children. The study, however, found that these consequences are preventable and treatable. Healthcare professionals such as school nurses were found to play an important role in the health consequences of childhood obesity among school-going children.
Conclusion. The study supports earlier findings identifying childhood obesity to be an intricate disorder that negatively affects school going children. It has significant impacts on both the psychological and physical health status of school-going children.