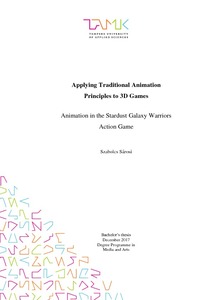 The purpose of this thesis was to find out how the traditional 12 principles of animation are applied in current 3D games. The aim of the study was to highlight aspects and find the best practices to be considered when working with animations in 3D games. The research was aimed at providing background for the case game, Stardust Galaxy Warriors.

The background data were collected and processed from various sources, including books, different web sources and pre-recorded presentations. The first part of the theoretical section introduces the origin and definition of the 12 animation principles, followed by an overview of the most important factors and circumstances affecting the production of 3D video game animations. The latter part of the theoretical section collects and summarizes numerous interpretations and functionality of the individual principles in video games. The theoretical part is followed by the case study, where examples from the game are presented and analyzed.

It was found that the principles of animation in games are not only used to ensure a certain quality of movement or character actions, but to convey and complete the game’s design. An animation can be considered successful if it clearly communicates an action while aligning perfectly with how the game was meant to be played. This is key in the aesthetics and immersion of a game. Furthermore, the study also showed how the principles are interpreted and employed to fit well with the game.

The findings indicate that most traditional animation principles can still be applied in 3D games as in other mediums. However, the most influential factor on how those principles should be utilized is the game design. It would be interesting to further study the intricate relationship between animations, game design, gameplay, and user experience.