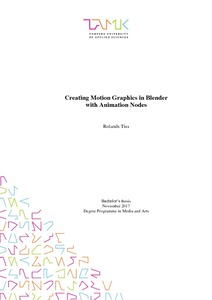 In the past decades motion graphics has evolved dramatically. From analog signal synthesizing and processing to keyframing and digital computer graphics. Among the evolution of technology also motion graphics development methods have changed. If 40 years ago there was a Scanimate, an analog computer animation system, then now there exist dozens of computer graphics development software.

As a rule of thumb, paid software should deliver higher quality content and offer more technical features than Open Source Software but is it possible to deliver competitive results with a free software? The goal of this thesis is to examine open source software - Blender’s and Animation Nodes’ potential in motion graphics.

Blender has been an Open Source Software since October 13, 2002 and keyframe animation features within it. Even though node based procedural animation techniques were known way before keyframing, Blender was lacking these features until 2015 when Animation Nodes appeared. Two animation techniques, but what differs them from each other in the same working environment? The purpose of this thesis is to compare these techniques; to find their strengths and weaknesses.

The case study revealed differences in motion graphics development pipeline when using two different animation methods. Also, it was found that almost the same outcome can be achieved using different techniques from which each has its cons and pros.

The findings verify that Animation Nodes is a great and powerful add-on for Blender. Instead of replacing already implemented animation features in Blender, Animation Nodes expands their capabilities to create competitive motion graphics for free.