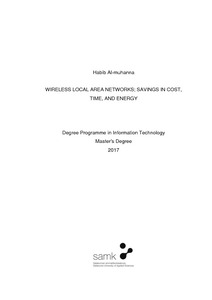 The purpose of this thesis is to prove that by using wireless local area networks (WLANs), it is possible to save cost, time, and energy. The focus was on network video. Small offices and users in houses could earn the benefits of using WLANs and / or network video; however, such benefits or at least some of them can surely be earned by companies and organizations.

Introduction and theoretical information related to network video were presented.

The Case Study methodology was used to achieve the objectives of the thesis, a hypothetical case was presented, a case that has many similarities in real world.

Problems and / or drawbacks which are related to the thesis objectives were tackled and the solutions were presented by using WLANs and network video.

It was proven that it is more cost, time, and energy effective to use a wireless local area network (WLAN) and the same for using IP cameras (network video) rather than analog CCTV cameras.

Also it was mentioned how to convert a CCTV analog video system to a network video system.