The Effect of Poor Access to Water, Sanitation and Hygiene on Health: A Study of Agbogbloshie (Sodom and Gomorrah) a Suburb of Accra, Ghana and Other Slums 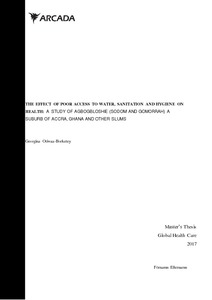 ABSTRACT:
AIM: The aim of the study seeks to investigate the effect of poor accessibility to water, sanitation and hygiene on health of the people living in Agbogbloshie (Sodom and Gomorrah) a suburb of Accra, Ghana and other slums in the world at large.

BACKGROUND: The rapid increase in rural-urban migration has contributed immensely to the rise of slum dwellers in most cities and towns. These slums lack social amenities such as good source of water, sanitation and proper hygiene and this is having significant effects on health in many countries.

FINDINGS: Poor access to water, sanitation and hygiene among the slum dwellers are cause by the factors such as uneducated, unemployment, poverty, improper sewage system management and poor housing policies. These bring about associated health risks such as diarrhea and cholera. The interventions such as implementation of MDG – Goals, IBM-WASH were proposed by agencies as a way of reducing these health risks and also eradicating the formation of slums.

CONCLUSSIONS: Although poor access to water, sanitation and hygiene has significant effect on health in slum dwelling areas, governments all over the world are doing their best through the interventions provided by the United Nations to prevent the health effects of the slums.