IMPACTS OF FGM ON WOMEN'S SEXUAL FUNCTION AND MANAGEMENT 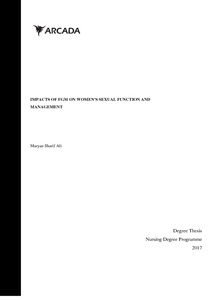 This research project aimed at establishing the impacts of FGM on women’s sexual function and management. It also had to establish the role of nurses on the impacts of FGM on women’s sexual functioning and management. The research was guided by the Leininger`s Culture Care Theory which advocates for a culturally congruent nursing care. A review of ten scholarly articles was undertaken to answer the identified research questions. Graneheim & Lundman (2004)’s qualitative content analysis proved useful in the analysis of data from the ten articles. Results showed that FGM is significantly correlated with the lowering of lubrication and arousal domains in women. Women with FGM were also found to have critically lower orgasmic domain scores and to experience increased dryness as compared to women or girls without FGM. In addition, women with FGM had significantly lower sexual satisfaction levels and desire for sex compared to the uncircumcised women. Further, the researcher recommends future research to be conducted to establish the negative effects of FMC on other aspects of women’s sexual well-being, such as the relationship between FGM and the fertility of women. Such kind of research would help nursing professionals and policymakers in making more informed decision regarding the FGM practice.