Impact of Airbnb on Hotel Industry in Helsinki 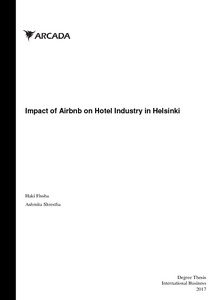 The sharing economy has opened doors to many business ideas within the hospitality industry but at the same time disrupted longstanding industries. Airbnb is one of the most famous company part of the sharing economy that has created a reliable marketplace for people to advertise, find and book an interesting and unique accommodations all over the world. The fast growth of this sector and Airbnb is due to technological advancements that provide an easy access to the tourism industry all over the world. It has put many questions in many hotel owners’ mind, who consider if Airbnb will be a threat, and if it has affected or will affect their business in the future.
The aim of this research is to find out if Airbnb has affected the performance of hotels in Helsinki. The target groups are from hostels to five star hotels. The study will attempt to find out if Airbnb’s presence has caused any impact on hotels in the Helsinki region, and if there is any competition between hotels and Airbnb. If so; has it influenced the hotel occupancy rate, price and revenue? A qualitative research method is used to conduct this research. Semi-structured interviews with 6 hotel managers were conducted in order to find out the performance of their respective hotels, against the background of Airbnb’s significant growth in Helsinki.
The results indicate that hotel performance in Helsinki has continued to grow while more and more hosts were renting out their places on Airbnb. Hotels have been very successful at selling their rooms with overnight stays in hotels showing an increase along with the occupancy rates and the RevPAR. All in all, Airbnb is not considered a threat to the hotel business in Helsinki as it does not have a negative effect on the performance of hotels. It is not even considered a competitor by hoteliers.