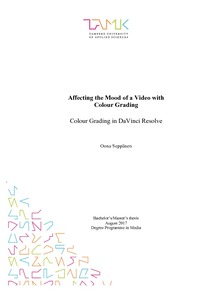 The purpose of the thesis was to examine how much it is possible to affect the mood of the video with colour grading. The research was carried out by applying different grades to the same video and creating a survey based on them. The respondents were asked questions regarding the mood that the video conveys. Finally, the collected data is analyzed by comparing how much the answers vary between differently graded videos.

Five different video examples were made by imitating the styles of different genres in movies and examining the appearance of a certain genre or mood can be achieved with only changing the colours in the video without making any changes to sound, edit, the style of filming, the plot or acting.

In the empirical part of the thesis the process of colour correcting and grading the videos as well as the practices behind it are explained with example photos of the process. Also, some general features of the colour grading program Davinci Resolve are presented.

It is known that colour grading influences the video’s mood, but there are also many other factors that affect it, like music, plot and the way the video has been shot. The survey was made without audio and other elements were also excluded to see how much only colour can change the mood of the video. The created grades are experiments based on the author’s observations and interpretations from different films.