A Study of Association between Accounting Manipulations and Bankruptcy Likelihood : Analysis of 18 public companies from the United Kingdom 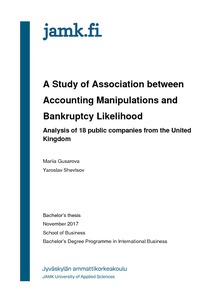 The primary objective of this research is to define whether there is any dependence of the probability of bankruptcy on the accounting manipulations. The researchers also tried to identify where the risk of the bankruptcy is coming from – from the market or a firm’s internal problems. In addition to that, the research aims to check whether the companies who poorly perform on the stock market are more likely to be manipulators.

The 18 companies from the United Kingdom have been analysed based on relationships between the Altman Z-score model, Beneish M-score model, beta and the standard deviation of the stock prices. The studied period is from 2010 to 2015.