Robots with and for the Elderly People : Case Study Based on Action Research 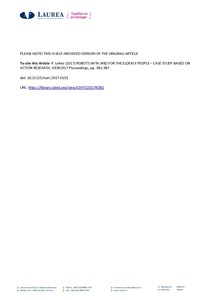 There is a demand to promote elderly people´s health and wellbeing and to support them to cope and live independently at home. Based on earlier studies the main problems of elderly people who are living alone are loneliness, unsafety and difficulties in daily life. The challenge is to response the needs of elderly people. The solutions will be new technologies, robotics and new digital services that are enhancing and supporting elderly people living at home as long as possible.

This article is based on an action research and living lab methodology for developing and studying how to apply robots in eldlery care. Action research as the methodological approach is congruent with the living lab methdodology especially when the aim is to develop and pilot new activities, methods or interventions for example robots such as service robots, care robots or social robots with users in real life. In this study both elderly people and and health care professionals are in an active role and engaged in the development process of using robots in eldelry care. The purpose is to present the findings of case study based on the phases of action research in the context of eldlery care.

This study is a part of the main research project called Robots and Future of Welfare Services (ROSE) funded by Strategic Research Council, Academy of Finland. The main research project adopts a multidisciplinary and holistic approach to study how advances in robot and perception technologies allow product and service innovation and renewal of welfare services, when such services are developed jointly with users and other stakeholders.

The living lab methdodology was used especially when the data was collected for planning and implemneting the two pilots with the robot. A small municipality in southern Finland has been the context for living lab research in this case study. Both elderly people (N=17) living at service house or at private home and home care professionals (N=40) have been participating in the study. During the data collection mixed methods have been used such as focus group interviews with SWOT analysis, survey, videos and demos.

During the first phase of data collection the present situation of homecare was analyzed and home care workers´ needs and expectations of the robots in elderly care were mapped. The three main categories as findings showed that robots can be useful as
1. Versatile reminder such as reminding the day, time or activities of daily living,
2. Possibilities of robots in elderly care mean the role of robot as helping or assisting, checking up and monitoring, supporting safety and offering interactive contents and program such as gym exercises, reading and telling stories, playing games e.g. bingo and
3. Robot in client´s holistic situation meaning reciprocal agreement and ethical guidelines.

The demosessions of five different robots were organized and both the elderly and professionals participated in. The findings were the basis for planning the pilots and chosen the Pepper robot. Two pilots with Pepper robot have been implemented. One was Bingo event with Pepper and the other one was Pepper as guiding the gym exercise for the elderly people. The feedback from elderly people, professionals and stakeholders were very positive an encouraging for planning the future pilots using Pepper.