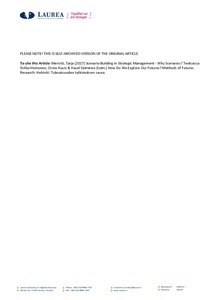 The corporate operating environment has changed radically during the past few years—even months. Companies are used to being the lead in the play. However, the play has now been removed from the repertoire—there is no new script and new theatre companies are being formed. It is time to prepare scenarios.

A scenario is originally theatre terminology, referring to a draft of the plot; it elaborates on the lines, the actors, blocking on the stage and the set in different phases. When transferred to the corporate world, its use is very analogical. Customers and competitors are co-actors, the general operating environment forms the set, and corporate strategy forms the lines and blocking on stage. The essential difference compared to theatre activity is that the repertoire and the actors’ roles are not fixed for the next season. Instead, a company must write several back-up scripts and secure roles even in different theatres.

Scenarios are a part of modern futures studies. They help imagine what is possible and analyse what is probable. They also act as a foundation when choosing a desirable future to be implemented.

From the company’s point of view, scenario-based thinking emphasises, on one hand, the unpredictable nature of the future, but on the other hand it grants the company the role of a proactive agent: it is possible to influence the future with one’s own choices and actions. According to Ervin László, a company can cope in a changing environment with the help of three basic conditions:

1. All parts of the company are productive.
2. The future is not built on past success factors.
3. No “master plan” will be made.

Including scenarios in strategic planning helps with all of these points. Scenarios stretch the examined time span further into the future. Thereby it is easier to see whether different business operations have a bearing in the future. Introducing different alternatives in the examination and identifying and dramatising—at least in one’s mind—even the smallest changes and weak signals serves to question old success factors.

In addition, scenario-based thinking in strategic planning emphasises flexibility and actively creating the future. This, in turn, breaks down the traditional way of thinking; first creating a master plan which will then be implemented. In scenario-based thinking a decision must be made at each moment, in a way, regarding whether to plan more or to start acting.