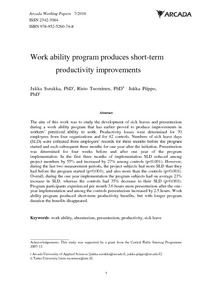 The aim of this work was to study the development of sick leaves and presenteeism during a work ability program that has earlier proved to produce improvements in workers’ perceived ability to work. Productivity losses were determined for 70 employees from four organizations and for 42 controls. Numbers of sick leave days (SLD) were collected from employers’ records for three months before the program started and each subsequent three months for one year after the initiation. Presenteeism was determined for four weeks before and after one year of the program implementation. In the first three months of implementation SLD reduced among project members by 55% and increased by 27% among controls (p<0.001). However, during the last two measurement periods, the project subjects had more SLD than they had before the program started (p<0.001), and also more than the controls (p<0.001). Overall, during the one year implementation the program subjects had on average 23% increase in SLD, whereas the controls had 35% decrease in their SLD (p<0.001). Program participants experienced per month 3.6 hours more presenteeism after the one-year implementation and among the controls presenteeism increased by 2.5 hours. Work ability program produced short-term productivity benefits, but with longer program duration the benefits disappeared.