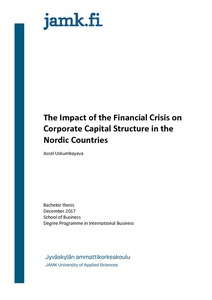 The aim of this study was to examine the impact of the financial crisis on corporate capital structure across the Nordic countries. The analysis was performed on a period extending from 2005 to 2017 on the basis of firm-level secondary data. The main objective was to determine whether the corporate capital structure had changed during the financial crisis and post-crisis when compared to the same in the pre-crisis sub-period.
Secondary numerical data was collected from the official databases and financial statements of the companies. The usage of the SPSS software enabled performing descriptive, correlational and multivariate ordinary and least square regression analyses. Descriptive statistics provided a factual overview of the dataset. A correlational study provided information regarding the level of association between two variables. The multivariate least square regression analysis demonstrated the extent of the impact of the list of independent variables on the dependent. Those methods served to test the asserted hypotheses and to answer the research questions.
The empirical findings suggested that the capital structure had changed throughout the period from 2005 to 2017. The corporate capital structure experienced changes from very high leverage ratios during the pre-crisis period to even higher ones during the crisis and, finally, to the least significant figure after the crisis. The results disclose that changes in the capital structure had not influenced risk and return of the companies except for return on equity ratio. Thereby, the outcomes indicate a positive association between the capital structure and return on equity.