Body and mind meet: A functional day for the members of Helsinki and Uusimaa Association for Visually Impaired 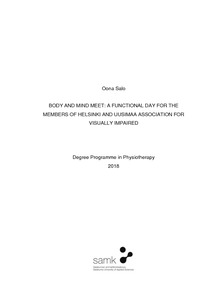 The aim of this Bachelor’s thesis was to plan and organize a functional day for the members of Helsinki and Uusimaa Association for Visually Impaired in October 2017. This was done in collaboration with the association. The objectives of the day were to promote physical activity to the visually impaired and support their mental health using psychophysical approach. In addition, introducing and giving participants tools how to practice body awareness and relaxation exercises.

The implementation was on 28th of October 2017. Nine people, with ages ranging from 49 to 76 years, attended the “Body and mind meet” functional day. The functional day lasted three and a half hours with the content divided into two separate sections: chair yoga and body awareness together with relaxation exercises. The feedback from the participants was collected verbally and in the form of a feedback questionnaire.

The feedback was collected from the participants with a feedback questionnaire considering participants restrictions in vision. With the feedback questionnaire, it was possible to evaluate whether the functional day was a success and whether developmental ideas arose for the future. Feedback collected from the participants was positive. According to the feedback, the content of the functional day was planned and implemented well to suit the target group’s needs. Based on the feedback it can be concluded that a similar kind of event would be beneficial. As a developmental idea, a long-term implementation including many sessions would support the mental health of this target group and aid them in understanding as well as practicing body awareness and relaxation exercises at home further.