Effects of the Swahili language on the East African economy 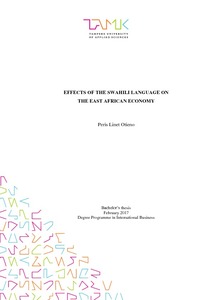 Swahili is one of the most popular and widely spoken languages in East Africa with at least 100 million speakers. The objective of this thesis was to point out how East African countries can use the language to improve their economies. The focus was on Kenya, Tanzania and Uganda because they use Swahili and have been doing so for a long time. In Kenya and Tanzania Swahili is a national language. The main aim of this thesis was to highlight the benefits of using a language in contributing to a country’s economy.

This study was made on a personal interest because the writer of the thesis is a Swahili speaker and wanted to explore the benefits of this language for East Africa. The global market is becoming more competitive, and East Africa has been trying to be more competitive, too.

The number of Swahili speakers is higher than it has ever been, and being that the language is now recognized by the African Union, and it makes sense to use it for political and economic purposes. Education, employment and even the East African Community (EAC) have all benefited from this language but very little has been done to ensure maximum growth in the smaller communities. With millions of youths struggling to make a living, it would help the local communities greatly if they used ready-made resources to solve some of their problems, the main resource being the Swahili language that is so popular, with at least 100 million speakers all over Africa.

The East African Community (EAC) was created solely for the purpose of strengthening the member countries’ economies. But this is going to take a very long period of time if the governments do not try to merge the local communities where real talent lies. Language is the most important tool when it comes to survival,and encouraging the use of one’s language is not just great for identity purposes but also economic prosperity. Swahili has proven to be the most resilient language in the East African region. Even with the colonialists attempting to abolish it and the hundreds of tribes trying to fight its existence, it has still managed to spread and not just in Kenya but in Tanzania, Uganda and other countries. If governments consider the issues they face daily that have all been brought about by the division and tension amongst tribes, they will realize that a common language is one of the biggest steps towards achieving unity and a competitive economy.