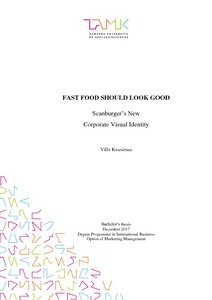 The aim of this thesis is to reflect on the new corporate visual identity which was created for a Finnish fast food hamburger chain Scanburger in late 2016. Scanburger is a Finnish owned fast food chain with 120 restaurants from which 110 are franchisee operated. The chain has operated for 21 years and has had a proper visual identity renewal in the early 2000s followed by some progress in the 2010s. The main reason the renewal was made was due to several researches stating that Scanburger’s visual identity along with restaurant design pleasantness was poor in the eyes of consumers.

The thesis explores how the chain has previously looked and visually communicated, what changes were made why these decisions were made. Information concerning fast food corporate visual identities are evaluated, researched and compared.

This thesis concludes by putting all the bits of new visual identity in to a graphic guideline for the use of chain management, franchisees and advertising agencies. A thorough explanation of what a graphic guideline is, how it is formed and what it needs withhold is followed.

The conclusions also state that the chain needs thorough brand book which is tool for the chain management and franchisees for social media activities, verbal and written communication and better explains what are Scanburger’s values.