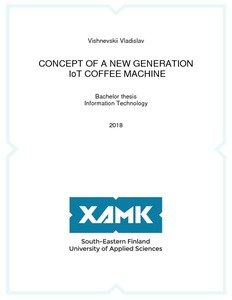 In this thesis the prospect of creating a new IoT coffee machine was researched. The idea based on finding the jug content and implementing monitoring for the users. Features, made possible by the presence of this information were studied. Such new functionality included, was not limited to a new portion of coffee creation. With new data, the coffee machine would be safe from overflowing the jug.

To find a method for the coffee jug content detection many sensors and methods were studied and some tested. The trial and error was the main method of acquiring information followed by reading documentation on different components and libraries. This was caused by the very practical focus of the study.

Based on the study a proof of concept was built. It has been based on the ESP8266 12-E board, quite similar to Arduino UNO. This thesis had the full process of development described as well as building instructions. The proof of concept creation also required work with a web server, the creation of web interfaces, usage of EEPROM, modeling and printing the casing on a 3D printer.

As a result of all studies, a concept of a new generation IoT coffee machine was developed. This included recommendations on an operation principle, casing, web interface, method of resource supply, installation and usage. A speculation on the reasons why the device could be popular was also introduced as well as all the advantages it would have over traditional coffee machines.