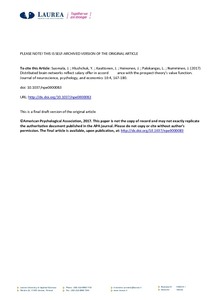 Previous studies have found an association between the prospect theory’s (PT’s) value function and the networks in the prefrontal cortex (PFC) and the striatum during routine choice, but little is known about the brain activity and the role of the PT during choices regarding a salary expectation. We constructed an experiment in which the subjects’ wage expectations were used as a reference point (RP) and representatives of two distinct psychological profiles in decision-making served as subjects. Sixteen university students—eight maximizers and eight satisficers—were recruited to participate in the functional MRI study. Maximizers normally put more effort and time to optimize their choices. Our design featured a constraint on time and maximal number of offers. Behavioral data showed that maximizers, unlike satisficers, tried to optimize the outcome even under such constraints. Functional MRI responses in the areas of the PFC (posterior medial frontal cortex and right rostral portion of the PFC), occipital cortex (left lingual gyrus and occipital visual areas), inferior parietal lobule on the right, and the angular gyrus correlated positively with increased wage offers weighted according to the PT’s value function. Furthermore, maximizers and satisficers differed markedly in how brain activation was engaged in the medial PFC. Previous neuroimaging studies on the PT’s value function have used status quo as an RP, whereas our results demonstrated activity in distributed brain networks when salary expectation served as an RP. Furthermore, the PT’s value function effect on frontal cortex differs according to the psychological profile, being stronger among maximizers than satisficers.