An analysis and comparison of current mat service 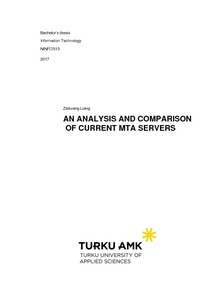 With the development of Internet, E-mail is widely used in our daily life and significantly reshapes the way people communicate with each other, especially in business contexts. Therefore, the security of E-mail systems is one paramount component of the entire Internet security system. Due to multifaceted factors, there is a wide range of security problems when we use email. A typical example is the viruses contained in emails. Hackers are able to invade the whole system through email viruses. Furthermore, another problem is the increasing number of spam and advertisement emails. Consequently, such mails easily take up much bandwith which ultimately leads to the decline of user connection speed and quality.

In light of these facts, mail servers have been designed by computer experts, with the aim to solve the above problems. Currently, there are several options for running a free mail server in the Linux environment. Common servers are Sendmail, Qmail, Postfix and so on. This thesis mainly focuses on the function of Postfix, the most common MTA server, for analysis. Early in 1998, Postfix was firstly developed by Doctor Wietse Zweitze Venema. In the early practice, a mail server was conventionally set by Sendmail program. However, with the fast advancement of technology, Doctor Venema identified some shortcomings while using the Sendmail program, especially with respect to safety and efficiency. In order to solve these problems, Doctor Venema initiated a plan to design a new mail server program which would be faster and safer to replace the original Sendmail program, namely, Postfix. The purpose of this thesis is to give a clear view of Postfix, compare it with other MTA servers and explain the reasons for the application of Postfix in Linux network and in other security systems.