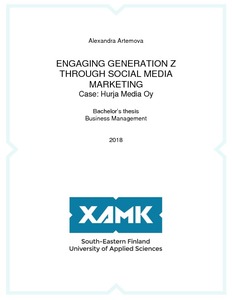 Generation Z with their ever-emerging power as a consumer segment is rapidly becoming the focus of many organisations nowadays. For this reason, the core objective of this thesis was to provide effective solutions for creating a successful social media marketing strategy in order to engage the youngest generation of consumers. The commissioning party of this thesis, Hurja Media Oy, is a social media agency that assists companies in the development of successful social media marketing, branding, content creation and social channels administration. Hurja Media was involved in the process of completing this thesis with the purpose of utilising the acquired data for their future business activities.

The thesis was based on the broad theoretical framework that covered two of the most crucial aspects of the given research: Generation Z and social media marketing. The theoretical part of this thesis was developed with the use of scientific literature as well as various digital sources relevant to the key concepts of the study.

In addition to that, the practical part consisted of both quantitative and qualitative research methods and included a strategic analysis, a survey for Generation Z representatives and interviews with three Generation Z members. Therefore, the primary and secondary data were gathered and examined for the purpose of gaining a broad knowledge and understanding of the key ideas of this study.

Finally, the acquired data was evaluated, examined and based on the findings, detailed conclusions were drawn, and most importantly, the initial objectives were reached and consequently, stated research questions were answered as well. As a result of this thesis, Hurja Media was provided with extensive data on the personality characteristics of Generation Z, their consumer behaviour as well as information about the current social media trends among them. A number of effective solutions on how to engage Generation Z through the social media marketing was provided in this thesis as well. Moreover, a significant contribution of this work was an e-booklet created by the author for the use of Hurja Media as a tutorial for creating a successful social media marketing strategy for Generation Z.