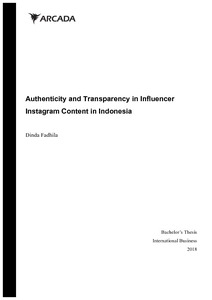 The world as we know it today is characterized by the growth of digitalization. With marketing evolving from traditional to digital, more brands are adopting digital marketing strategies. Over the last few years, the use of influencer marketing, in particular, has been on the rise. Brands are taking on this approach as they are challenged by the difficulties in making their advertising messages reach their target audience effectively online due to the escalating usage of ad-blocking software by the audience, and due to the growth of the internet and social media that have created a more conscious audience.

Limitations of this study that may hinder the ability to generalize the results are present. Firstly, the researcher sole focus is in the Indonesian context. Secondly, the researcher gathered the primary data from only six respondents. In addition, secondary sources that have been used are inclined more toward the Western context as there is a lack of literature relevant to the topics of authenticity and transparency in influencer marketing in Indonesia.

The researcher conducted a literature review using existing literature related primarily to authenticity and transparency in influencer marketing found on scholarly books written by distinguished authors such as Michael R. Solomon, Philip Kotler, and Mark Schaefer. Peer-reviewed journals and articles, as well as other sources found on the internet, were also reviewed. The primary data itself was collected through personal online, semi-structured interviews. Samples for the empirical research were gathered through two processes: purposive sampling and convenience sampling.

The results indicate that Instagram users in Indonesia are aware that the use of influencer marketing strategy in Indonesia and on Instagram is on the rise. With more exposure to influencer contents, these users are bombarded with sponsored contents and advertising messages shared by influencers the moment they open the application. As a result, influencers are perceived as marketers. It is also found that authenticity plays a bigger role compared to transparency. Users expect influencers to collaborate with brands that are aligned with the influencers’ self-image and to create great contents; however, users do not feel that influencers need to be transparent about with whom the influencers are working with as the influencers themselves are seen as marketers. These results are generated through a qualitative study based on six personal interviews, and thus, should not be generalized.