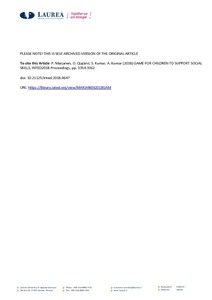 Children learn social and emotional skills from their peers, parents and people with whom they are in contact. According to Vygotsky sociocultural peer group learning is a result of children’s co-operation and interpretative reproduction. Good peer group learning session gives the children possibility for the social comparison. It builds also self-perception and includes action and many times some artifacts.

Children can also learn by playing games. Nowadays, digitalization is a vital part of our daily living and learning environments are dramatically changing. Under these arguments rouse an idea to develop a game that will meet the match. A new game where children can learn in groups. Other demands were that it should be easily grasped, it is cheap and it would work globally not depending on the cultural backgrounds of the players. New elements could be added to the game depending on the amount of digital technology it is possible to use, but it should also work without any technology as a board game.

The starting point of the game was Lego Therapy, game for autistic children to ease their antisocial behavior. Developing and testing of the game happened in international and interdisciplinary Indian-Finnish team. The designing process based on the user-based development, and the main users have been the children themselves. In this article is presented a new game which main aim is to support children social skills. The game has been developed in a part of CIMO funded FINDIgATE project. FINDIgATE is a project that does India – Finland co-operation with Laurea University of Applied Science and Turku University in Finland and two universities in India KIIT in Bhubaneswar and IIT in Kanpur and Loyola College in Chennai.