Perspectives of early childhood education in India and Finland 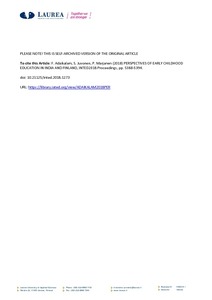 The article introduces experiments based on the project called FINDIgATE (2016-2017) which aim was to view how children’s educational systems work in India and Finland. The aim of this article is to present early childhood education and its influence on child´s wellbeing in Indian and Finnish perspectives. One important approach in Finnish ECEC is child-centred approach which takes into account on child´s wellbeing and we argue that child centric approach would be needed in India as well. In this article child-centred approach is defined as pedagogic choice and delimitation which emphasizes children's ideas and children's enthusiasm, learning and perception, and supporting all of it with the right methods and choices. Child-centred approach strongly belief in the children's abilities and potential. This approach is included as a key element on children's voluntary and planning activities, which regulates goals, content as well as self-realization (Kinos 2001 30,38). Respect and equality of the child's individuality are in the background of the child centric thinking. Every child is accepted such as they are and every child is as valuable and important. (Hytönen 2002 14).

Early childhood education in India is a complex one whereas in Finland it is considered as a basis of public services, which is organized with national core curriculum. Finnish early childhood education´s aim is to promote child's holistic growth, development and learning. Local curriculum is based on national core curriculum, which provide a common basis as references to the legislation governing early childhood education and care as well as instructions for preparing and developing local curricula. In the Indian context, the existing market is determined by socio-economic factors, regions and size of population since Early Childhood Education and Care (ECEC) is unregulated in India.

Finnish educational success story and its positive impact on child´s wellbeing provides possibility to implement Finnish educational models. But when compared to India with huge population, regional variety and the number of children in school age, would it be possible to compare and understand the difference between India and Finland? Could Finland success in educating children and taking care of child´s wellbeing be taken as a model to adopt? Can a child be seen as a holistic human being, whose well-being and development as a whole person taken into account are some of the questions addressed in this article. Though challenging, it discusses on how Child-Centred approach is both beneficial and rewarding.