Improving general efficiency of a company 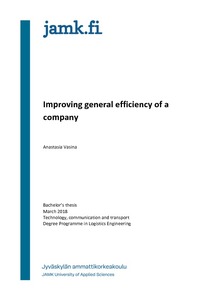 The study was conducted using qualitative and quantitative analysis. The material was collected during the internship from interviews with the employees, own observations and measurements that were done to test the hypotheses.

As a result, the weak spots were found and the main one was the wasted time on preparations for the job. Other issues such as proper planning of the layout of the warehouse and poor communication between workers were found.

Based on the discovered problems, a few suggestions were proposed. 5S implementation is among the proposed solutions and an instruction on implementation was presented in
the study.