Customer satisfaction in a small restaurant 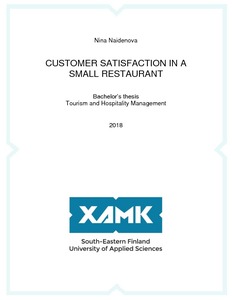 Nowadays, the competition among restaurants is strong. Customer satisfaction and the quality of service are the main factors which help to work, improve the business and increase the profits, and especially keep the customers.

First of all, the literature was studied which helped determine of the theoretical background about customer satisfaction and measurement methods. The definition of customer expectations was also described. In addition, two types of research methods were used. As a quantitative study two surveys were conducted during the event in the restaurant, and the qualitative part was a semi-standardized interview with the restaurant manager.


The results were analyzed using knowledge from the theoretical part. The results helped to describe the conclusions about customer satisfaction at Pannukakkutalo, also helped to identify the main reasons for which the guest remained dissatisfied. As a result of this, some recommendations were proposed to eliminate negative moments for increasing the satisfaction. Besides, since the customer satisfaction survey was conducted twice, some suggested recommendations were implemented prior to the second survey and thus, the results of both surveys were compared. As a consequence, additional conclusions were drawn.

The study showed that the customers were satisfied with the Buffet event. Most of the feedback was positive, and the participants were more likely to return to the restaurant in the future.