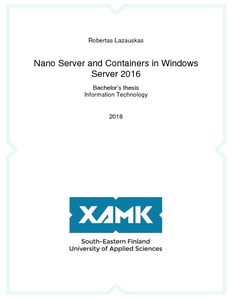 Windows Server 2016 has a lot of new impacts in various of fields. These impacts consist of compute, administration, identity and access, networking, storage, security and assurance and failover clustering. These impacts were analyzed, and based on my own decision I decided to test Nano Server and Containers in practice.

The operating system and working environment were given by the supervisor. Server was created in a cluster. Based on the project theme, all configurations were made on Windows Server 2016. Container management was made using the Docker program providing containerization.