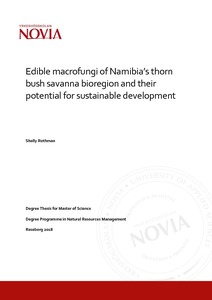 Namibia is the driest country in sub-Saharan Africa, yet, despite a variable rainy season lasting roughly December to April, plentiful macrofungi have been observed in the thorn bush savanna region of the country. Lack of research and public education regarding these species resulted in virtually no knowledge of the country’s fungi and limited fungal knowledge and use among its peoples. Consequently, Namibia is missing a sustainable development opportunity, namely, the growing worldwide popularity of fungi as food, medicine, and means for crop diversification. Therefore, in the 2015-2016 and 2016-2017 rainy seasons, this study aimed to inventory the species growing in the thorn bush savanna region and determine edible species available for domestication and cultivation. Field data was collected using regular site visits and specimen collection, plus DNA analysis. A statistical analysis using R statistical software showed species richness and abundance had a positive correlation with rainfall. In total, 67 species were found, with 13 edible species, and six were highlighted for domestication/cultivation research (Agaricus campestris, Calvatia lilacina, Coprinus comatus, Ganoderma sp., Schizophyllum commune, Volvariella volvacea). In addition, three species of termite fungi (Termitomyces) were found which have been overlooked as a food source in the country. The possibility for more edible macrofungi remains, as does the need for more research regarding Namibian macrofungi species and their ecology.