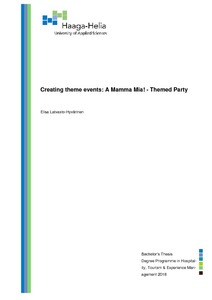 This is a product- based thesis and therefore a theme party due on the 23 March was im-plemented during the process. The aims of this thesis were to learn about the event industry in order to gain experience in event planning and management, and to find tools in order to work as an entrepreneur in the business. One aim was also to promote the authors trade name and to make one.

The report consists of the theories of event planning including several aspects of it, a man-agerial part of the planning process of the event, the evaluation part and last but not least the theme event in the appendix. The theoretical part of this thesis consists of desk- re-search and online search of current information in the business. The evaluation of the suc-cess of the project is based on the theory presented, self- assessment and different meth-ods of collecting guest feedback. An event page was made on Facebook in order to give information and keep up the mood until the party. The event page also worked as a plat-form to share pictures and videos on social media and other guests after the party.

The party was themed according to the Mamma Mia! – Musical, which consists of ABBA songs. The event was implemented as a surprise party for the author’s sister for her 50th birthday. The author planned and implemented the party that took place at a rented farm-house in Pornainen. The party had two themes: one that was based on the Mamma Mia! -Musical, which is an all-time favourite movie of the birthday hero and an other based on her favourite colours pink and gold. Adding her favourite colours to the table- setting took the old farmhouse up a notch and gave it a glamorous vibe. The décor and programme played big parts at the event: there were games, different props, karaoke, sauna and a bathing barrel for the guests. The menu was implemented potluck- style and all of the guests brought in something.

The event was almost a complete success: the props, décor, cake and atmosphere being the highlights of the party. The potluck- style menu had its difficulties and downsides to im-plement and did not go as planned. The learning outcomes came mainly of the managerial sides of event planning, budgeting and delegating tasks. The event reached its main goal, which was to glad and surprise the author’s sister with a party she had never experienced before. She was completely surprised, shocked and had tears of happiness in her eyes. She and the guests noticed many of the details put into the event and loved them. In order to get positive feedback the event had to include aspects of an experience, with this objec-tive the author succeeded well. The average number on the scale of one to five was rated four point eight on overall experience, props and décor and the flow of the event according to the feedback.