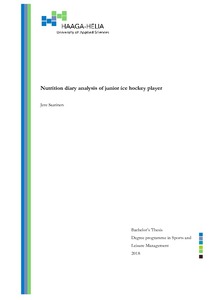 Ice hockey player’s nutrition is usually not the most discussed topic around the sport. Still it has a big impact, and the players are taking it more seriously every year when trying to reach the full athletic potential. The purpose of this thesis was to analyse the food diaries of one junior hockey team. Main factor was the relation between energy consumption and energy intake. The quality of eating, meal timing and drinking of liquids were also key topics in the feedback.

The target group were Pelicans Lahti C2 junior team. They are 14-15 year old teenagers, who practices more than five times a week and play in the highest junior level in finnish league. Players filled a food diary during four days, where they put all the foods and drinks they were eating. Also the eating times were written in the diaries. Energy consumption was calculated through the food diary analysing program. Players also wrote in the diary, how much physical activity they had during the day. After that all the numbers were put in the analysing program, which gave the daily caloric numbers and also the daily amounts of proteins, carbohydrates and fats. The food diary of 15 players were analyzed in the process.

Results tell, that most of the players are not having enough energy during the day, since the energy consumption is on it’s highest peak during this age. Most of the players, with few exceptions, stay also a bit low on getting of carbohydrates, proteins and fats. According the diaries, main reason for that is the absence of one or two healthy snacks during the day. The main meals (lunch and dinner) were decent in the diaries. Some players also left out a proper breakfast, which is very important for athletic teenager. The most positive thing was, that zero player based their nutrition on unhealthy food choices. The players seem to have a good knowledge and motivation towards nutrition.